For some reason, I seem to be very organised this week and I am managing to do challenges as they are published, and not on the last moment. Not sure how long it will last for!

The Sketch Saturday challenge this week is: 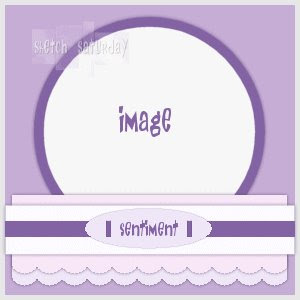 And just look what I bought on Saturday.... the Patti Picklicious cd by Kirsty Wiseman! She was demo-ing at the Craft Range in Burnley - literally 10 mins up the M65 for me, and it just seemed rude not to go along and say hello! I did take the boys with me - both I had to wake up in the car (not that they find crafting boring, but they were tired the poor little lambs) so they were not best pleased about that, but Samuel was poorly (he'd parted with his juice in the carpark earlier) and was not wanting me to stop and chat to a woman with loads of cards on the table and chat about sausage dogs. Jacob was a bit more amenable but pretended to be shy. Although he did listen to the conversation as he kept asking to go back and see Kirsty and look at her sausage dog (she showed him a pic of Eddy on her pc).... 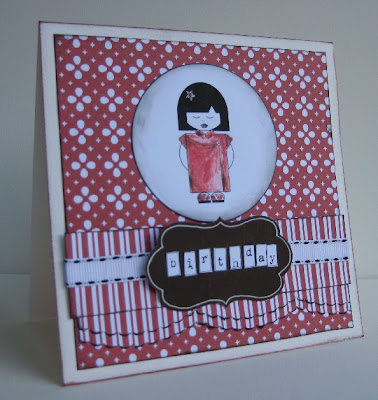 Anyway, I spent a nice time on Sunday browsing the contents of the cd (I've made a few cards with the papers but those will come later in the week) and decided to use the cd for this card - the only thing that is not on the cd is the black and white ribbon!
I've gone around the edges of the fancy sentiment with a white gel pen, the scalloped edges are a Martha Stewart punch, and the typewriter effect letters are also from the cd. The image has been coloured with watercolour pencils.
I am liking this cd!
Posted by Tip Top at 12:38