I somehow managed to miss the deadline for last weeks Sassy Cheryl's Challenge - I had the image coloured and the papers ready and then the time just went! Luckily, I've managed to use what I already had for this weeks challenge!

The challenge this week is to use:

A Nestabilities Spellbinder Die
As I just have the one set, it was an easy decision to make! The image is from Sassy Cheryl and I've coloured it with Promarkers. I've used the die to create a frame around the image which works just as well. 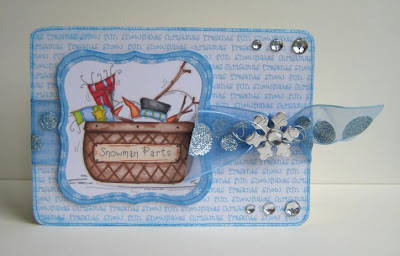 Not got a clue where the papers came from but they were in my Christmas folder already printed and waiting to be used! I bought the ribbon last year (can't remember where) and it is quite glittery especially when it has been trimmed so I had glitter on my face one afternoon when I picked Samuel up from school much to his disgust and horror! 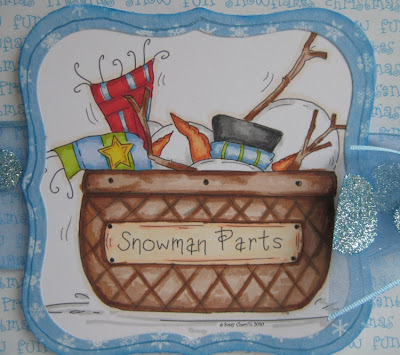 The silver snowflake is thick card and is supposed to be a gift embellishment - they were reduced in the January sales at Matalan - way too good for gifts - much more suited to cards! And the gems are from the Poundshop! I had to wrap some wire around the snowflake to keep it attached to the ribbon as I don't think any amount of glue was going to keep it in place long enough!