I'm getting withdrawal symptoms as it is a week or two since I entered a Christmas challenge, plus I bought some fantastic bargains in the sales - all of which feature on this card! There is a great simple but strangely complicated (because it has to work just right!) sketch on Jingle Belles Rock this week.

I've used papers from the Dovecraft Let It Snow 12x12 stack and no, I cut into the sheet fine! I normally cannot bring myself to cut a part from such a large sheet but this time, I was ok! I bought the pad half price - £7.50 from Boundary Mill in the sales. Plus the 6x4 version too! This sheet is glittered although my very bad and blurred photo does not do the paper justice. 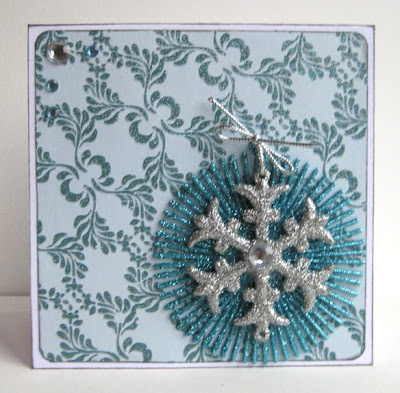 I've used two Christmas tree decorations too, which, yes you've guessed, I bought in the sales! The bottom one came in as part of a pack of 8 - 2 of each colour in equally vibrant pink, green and yellow from Sainsbury's. The top star with gem was from Matalan. And I am now quite sparkly myself!

The gem taken from the underside of the silver star has been added along with a few other gems to the top left of the cad. Waste not want not!

Ah, and here is the sketch! I think I'll be using this sketch again as I'm now in the mood for more Christmas cards! It won't last long, so don't worry!