I've had a pretty productive day today. Crafting and housework. I've managed to get a head start on some of my Design Team commitments, or at least they are started (I have around 7 projects on the go at any one time!) plus I've managed to almost catch up on the HUGE amount of washing. There was only one day this last week that I didn't do any washing and I swear it reproduces on its own!

Six loads washed and almost dried with a further 2 to do; anyone would think there was more than 4 of us in this household.....

Anyway. I managed to get the card completed for the Tiddly Inks challenge which is:

Refresh Me (or all white card)
Ok, so mine has black on it too, but I guessed that with the image being black to start with, I was allowed otherwise how would you see it. See - method in my madness! It's a Tiddly Inks image which I have been itching to use and now I can as I need to send a letter (yes a letter - not an email!) as I forgot in the run up to Christmas and as the recipient is a card maker too I feel she will appreciate it! 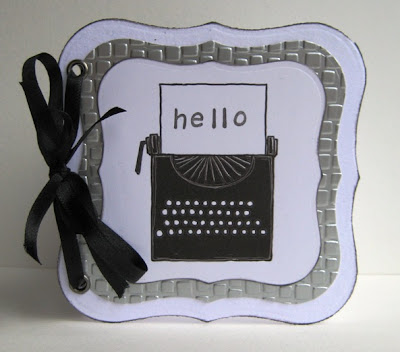 I've used my trusty Studio G mini wooden alphabet stamps for the wording, Nesties for the layered shapes. And a confession. I didn't leave enough space for a spine to the card and ended up cutting two shapes. Hence the eyelets and black ribbon tie!

Everything is from my stash as off-cuts and I've used a Cuttlebug embossing die for one of the layers. A quick card to make but it still took me 4 days to finish it! Good job its already late as not sent before Christmas!