Just about finished this card on time! It's been in progress all week but as I decided to do a Tidy Up it didn't get finished! The Tidy Up is still not quite finished and I now realise just how much stuff I have and that I really do need to use it up before I buy more! The box of off cut bits of card is almost overflowing so I'm hoping to drastically reduce it over the next few weeks!

Anyway, the Tiddly Inks theme this week is:

Green
So, I've gone with a slightly different take on the theme - enviromentally! I won a gift certificate recently from Tiddly Inks and was trying to decide if I should use the robot image or one of the new releases for this challenge. The robot won, as you can see! 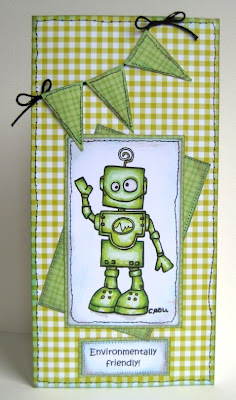 I've coloured him with Promarkers and all the papers are from Craft The Year Away from Funky Hand. I'd printed them off for something but not used them. I've faux stitched the edges of the card and image - the other peices have just been dotted with a fine black pen. Sentiment is computer generated and I've used some embroidery thread from my stash for the bunting.

The bunting came about because I'd picked the wrong shaped card blank to use (in an effort to use what I have!) and had covered it with the backing paper before I realised. So there you have it - robot bunting!