Ta-dah!!! Here he is! Samuel is only at school for the afternoons this week and then two weeks of mornings (the final week he stays for school dinners) as he starts full time on 29 September. But doesn't he look cute??!!

Fortunately, I had decided to get him dressed sooner than anticipated as we were going to walk the 20 mins to school but it chucked it down (funnily enough!) so I had a bit more time to play with as we ended up going in the car. I then realised (before these photos were taken) that his trousers were way too long!!!!

So a quick few stitches will make sure they look acceptable and I can sort them out properly tonight. 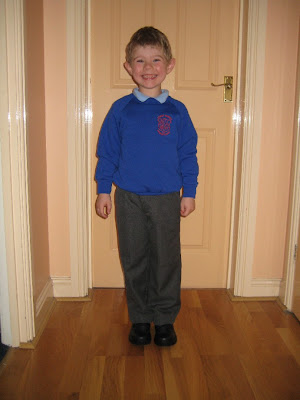 He's quite chuffed to be going to school and only asked about nursery on the way and if Jacob was now in pre-school (yes he is). 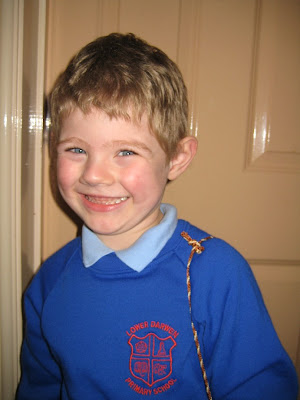 And I pick him up in about 30 mins from his first day at school!!