The Donkey Who Thinks He is a Camel

Following on from last week's Reception Nativity and Angel Jacob, here is Samuel dressed as a donkey who thinks he is a camel! The Infant classes at school performed Ooops A Daisy Angel (some 60+ kids!) with identical twins playing the leading role! This was not revealed until the very end! 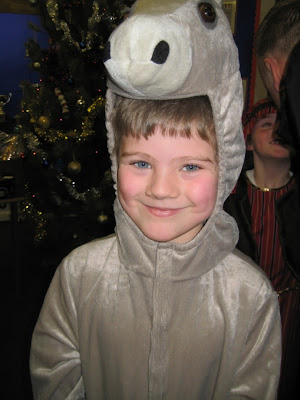 Samuel had to say that he was a camel with two humps on his back so he could be let into the camel park on the way to Bethlehem. Sounds a bit mad explaining it, but it worked - you had to see it to understand it!
Posted by Tip Top at 13:00