Samuel took part in his fourth outdoor race of the year on Sunday - he wasn't originally going to be there as the Daytona Manchester Inkart Festival should have been on the same day but its now this coming Sunday, so it meant Samuel could race at Hooton Park.

He had a really good test day the day before (so I was told - wasn't there either as Jacob had a football match but it was cancelled last minute due to illness!) and was feeling confident going into the qualifying round on Sunday.

If you want to see some short videos of his three grid starts (heat 1, heat 2 and final) then click here to go to the boys' karting blog.

Anyway, I was kept upto date on his progress during the afternoon as Jacob had a Birthday party to attend and I decided to brave Asda and then popped to Staples as they were having a closing down sale.  I was in the middle of Staples when I got the call to say where he'd finished in the final race and must have looked like a right nutter!

So here he is on the podium - he took third place and his first ever outdoor trophy (he has 9 from indoors plus on Sunday he gets the second place Championship trophy too!)  The 4th and 5th placed drivers also got trophies too and first and second stood on the same step!  Samuel is the one in all black in the centre of the three stood together: 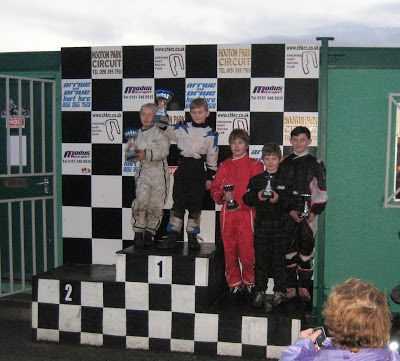 And here he is with Ryan who runs CKSUK team of which Samuel is part of with Samuel in second place on the grid. 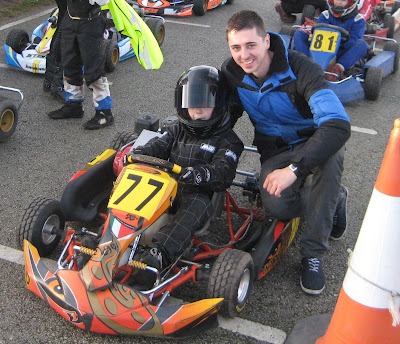 I think it's sunk in now with Samuel that he's won a trophy for outdoor karting after collecting so many indoors as its not an easy transition; its cold and wet most of the time!!
Posted by Tip Top at 22:00