The Cute Card Thursday challenge this week is:

"FOOD & DRINK"
Create a card with an item of food or drink on it somewhere - as simple as that! 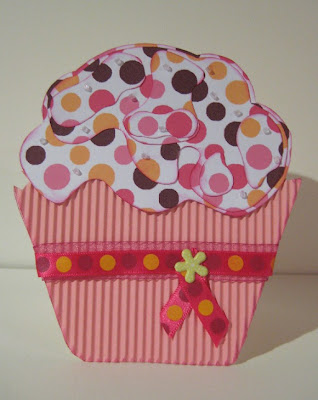 I'd bought a few chipboard templates a while ago but not got round to using them (unless you count taking them out of the pack a few times and looking at them!) One of the templates was a cupcake which I thought would be perfect for this challenge. Plus I really should make more shaped cards as I really enjoy it!

The cupcake wrapper (is that the correct terminology?!) has been cut from pink corrugated card and the fondant iced top is from Funky Daze (Fun Daze collection). As I liked the dot pattern, I decided to layer it a little and randomly so it looks like the icing is slithering down the bun. Yum! 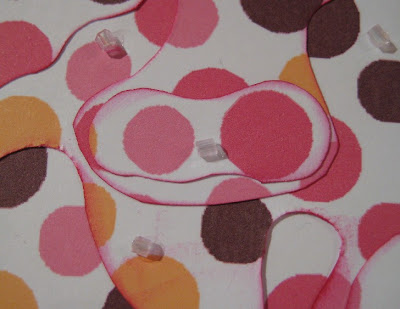 All edges have been inked in pink and I've added some tiny beads for sprinkles - I think they were a freebie from yonks ago and I'd just not used them before. I've used two ribbons around the middle of the cake (the organza was donated by Enfys - the spotty one I bought from Hobbycraft) and the daisy brad was from a lovely lot of stash as part of my camper van swop with Alex last summer.

Inspiration for the colours has been drawn from Molly and Izzie - but be warned - don't visit if you are hungry!

I think I could be making more of these as they look so good! And they passed the 'what is it test' - asked the boys what they thought it was. Slight pause before they both said CAKE!! Just need to watch Jacob as he will probably try and scoff it!