Made this dinosaur card last night as part of my demonstration cards for It's Funky Too. Had been working the idea through in my head for a while but not really found the right backing paper to do it. Then I found this little gem on the cd!! The template is hand drawn and it fits neatly over a 15cm square blank card - I just trimmed the excess off around the edges - the bend is at the top of the card.

The head and tail are attached with eyelets and brads so they move about. 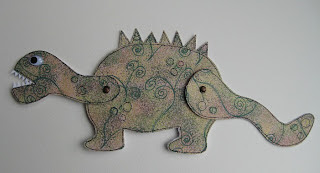 And so that they can fold into themselves to fit into the envelope. Although it does look a bit like the dinosaur is sniffing its bottom! 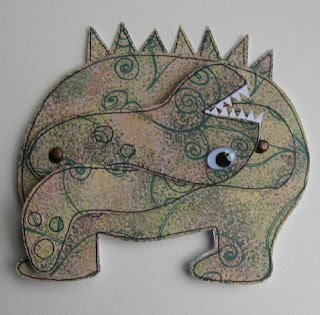 The only extra bits on the card are a few age spots cut from the same card and with black fine marker circles, and the same black marker around the edges of the dinosaur. I showed it to the boys this morning and they loved it!
Will make a few more of these and see if they sell at the Craft Fair next weekend!
Posted by Tip Top at 16:30