Doesn't he look cute?!! Samuel had his Tiny Tiger (Karate) orange belt grading last weekend (13 July) but we don't get to find out if he passed or not until he has his lesson, which is on a Friday. So look what he came home with on Friday!! 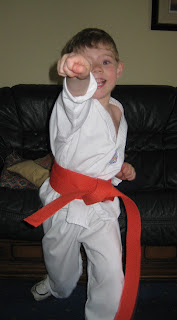 He was so chuffed with himself that he wanted me to take some photos of him doing his 'moves', so I obliged! 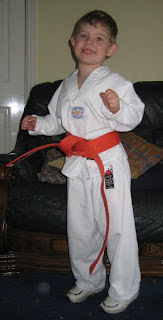 Jacob was a bit on the grumpy side (in the middle of a really bad cold which is affecting his hearing) and didn't want his photo taking with the old yellow belt. But he still managed to get his fat head in the way! Samuel looks a bit manic on this photo, but he usually looks more sane! 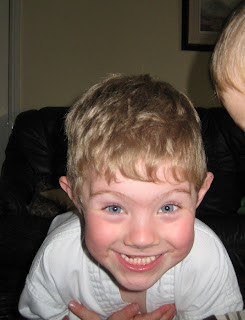 He's done really well as he's only been doing it just 12 months and has gone from white belt to purple, to yellow and now orange and he only has 1 lesson a week. He has a mean punch and a bone crunching kick for an almost 5 year old!!