It's Been And Gone

Two pics of the boys taken on Christmas Day at my Mum and Dads.

Jacob enjoying his kiddie cd player - Thomas the Tank Engine stories and Christmas tunes have been on non-stop and its really funny when he tries to sing along!

I especially like this slightly out of focus pic of him as it shows off nicely the very first teapot I made when I was at art college and 19. See Alex - I said I'd show you some one day!! 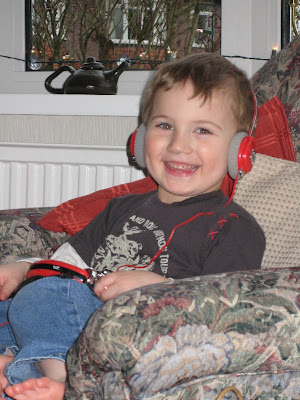 We bought Samuel a kids electric Gibson guitar which helps you learn to play rock n roll songs such as Smoke on the Water. He has yet to perfect the correct chords, but he's really good at the rock star / guitar hero stuff. 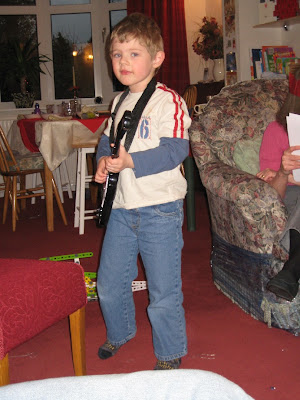 I did take a video of Samuel accompanied by Jacob on the cymbals but its too big for Mr Blogger so once I've rectified that, I'll show you the little darlings in full flow!
PS Yes that is industrial strength cling film on the lower part of the chairs - my brothers cat is residing at my parents whilst he is away working and she especially likes the 'fringes' so cling film stops cat from wrecking the chairs.....
Posted by Tip Top at 14:50