It's the last Sunday of the month so its another round of the Inkart Championships at Daytona Manchester!  Three rather exciting qualifying rounds and Samuel again had a bit of bad luck in one of the rounds however he started again in the A final with a 4th place grid position and just like last month, he whipped round the second and third grid starters and straight into second place on the first corner!

He held his position for the full 20 laps and finished in second place!  He also broke his personal best time which previously was 26.01 seconds, so now he has a 25.90 second lap!

Here he is getting his second place trophy: And on the podium with the other cadet drivers (they are the smaller ones!) and the junior drivers.  Samuel is second in the black suit on the left of the picture: 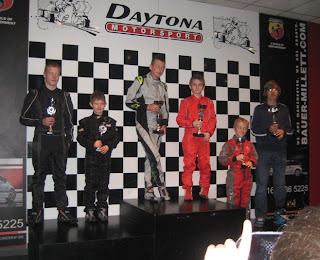 And here he is with his trophy!  It is actually slightly different to the March race and also a bit bigger too! 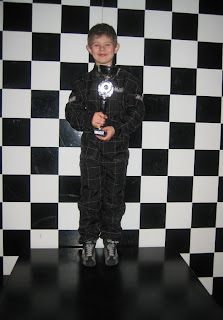 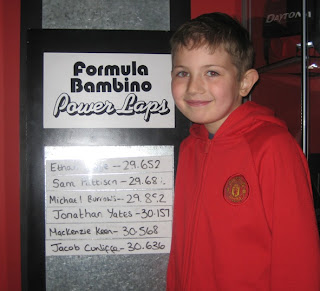 And not to be outdone, Jacob has made it onto the Formula Bambino Power Lap standings with a 30.636 lap in the recent Formula Bambino round!  It's not his personal best time but still a cracking good time!

I think I'll sleep well tonight as it was a rather early start due to the Manchester Marathon and the roads being closed around Daytona Manchester!  Plus all the excitement!!
Posted by Tip Top at 19:00