Was It Really That Quiet??!!

Rather than watching the telly last night, we played some videos of the boys when they were a lot younger. Actually, Jacob only featured a few times but there was a lot of Samuel!

I did most of the filming (the video camera was bought as soon as we found out I was expecting!) and as I sound terrible I didn't speak (broad Lancashire accent sounds terrible on recordings!) so the only noise was what ever the boys omitted or the telly in the background. Samuel actually, at 3 weeks old did a good jig to the Bee Gees 'Staying Alive' and Madonna's 'True Blue'.

The boys were fascinated by themselves although Jacob kept insisting it was him as a baby when it was Samuel!

This pic is of Samuel and he was about 3 weeks old. The t-shirt was a freebie from a magazine and as he was so small it fitted him! You can just see that his ears have no real ridge at the top - when he was born his ears were almost completely flat and his head cone shaped. Due to the fact he was engaged from 30 weeks....... and arrived 5 days late! 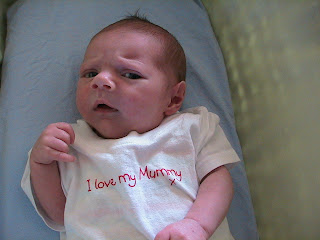 He chunked out quite a bit from 2 months (this photo he's 3 months old), so much so that my brother said that Samuel's wrists and ankles looked like we'd put elastic bands round and the flesh had puffed over the sides! The pillow case is one I 'borrowed' when I left home in 1993 and was mine when I was a child. My mum knitted the tank top Samuel is wearing and it matched a pair of chocolate coloured cords. I made him some braces so they would stay on!! His ears are now normal! 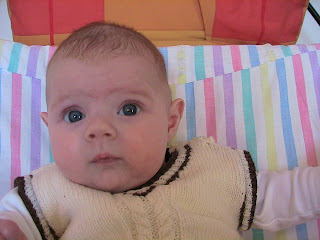 Samuel was a week short of his second birthday when Jacob arrived. Samuel looked so sweet on the video and he kept patting and rubbing Jacob's tummy to keep him quiet! Jacob is not 24 hours old in this photo and he'd not yet had a proper bath. His eyes were a bit puffed up as he arrived pretty quickly! 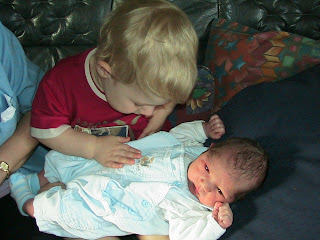 And here they are in May this year on holiday. Struggle to get a decent pic of them together and smiling these days. Jacob does the cheesy toothy grin thing and Samuel pretends to be sad..... 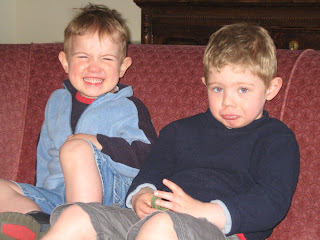