Yesterday was horrible weather wise. It had tried to snow overnight but left a sort of nasty wet slush everywhere. It kept raining, or rather hailstones on a frequent basis, the wind was howling. And it looked really cold. So we didn't venture out at all!
I had a special card to complete (more about that later in the week as its not her Birthday until tomorrow!) and I wanted to do some more examples for the new Funky Hand cd - Funky Daze, plus also to make a start on some challenges.
I did some stamping later in the afternoon and the boys wanted to join in. Samuel liked the robot I'd just stamped and he wanted a tattoo. So being the daft mother that I am, I obliged! (Fortunately, I'd only used a Stamp It Up water based pad and it all came off in the bath later!) Jacob wasn't too interested in the robot so he got a dog on each hand. 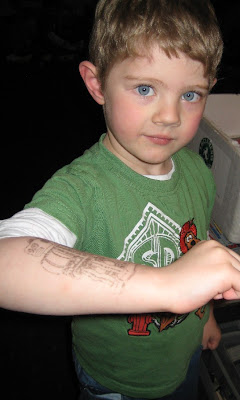 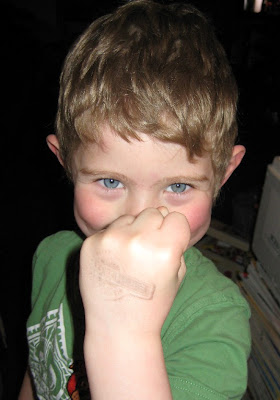 Samuel fell asleep on the settee and Jacob had mischief written all over his face so I asked him if he wanted to do some cutting. Gave him my fancy scissors and some scrap card and he was away! 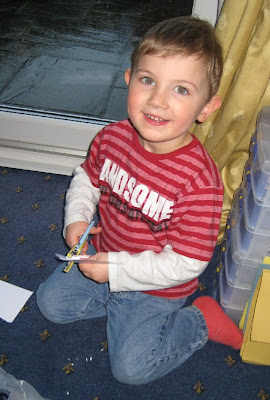 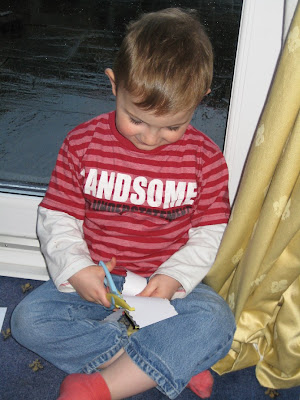 He then wanted to stamp. Not with my precious things he's not! So I found some kiddie stamps that were hidden away. Thinking that there was a reason why the stamps were not particularly accessible, but not remembering why, I gave him the stamps. 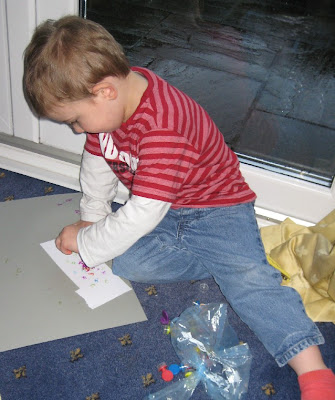 The purple letter 'i' got used a lot. 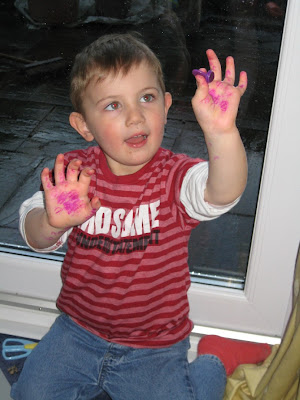 And it didn't really come off in the bath either. That's why the stamps were hidden hehehe!!
The slogan on his t-shirt says 'Handsome is an understatement' - Primark's finest fashion and it washed well!
Posted by Tip Top at 21:35